Skip to content
MAR 21 CANCELED DUE TO COVID-19
Our next concert will be as soon as it is safe and reasonable to perform.

How Don Kindred capitalized on his strengths to create a musical education program from scratch.

“Where are all the strings?” That was the question on the mind of Don Kindred while living in Corona, California in 2013.

At that time, the musical education system in Corona placed most of its focus on teaching children band, rather than orchestral instruments, meaning that students in the area were trained in brass, woodwinds, and percussion, while stringed instruments were largely ignored. Kindred, a classically trained musician and founder of the Corona Symphony Orchestra, knew that if nothing was done, a great opportunity to expose students to the magic of playing stringed instruments might be squandered. So, five years ago, he decided that change needed to start with him and the Corona Symphony Conservatory was born. 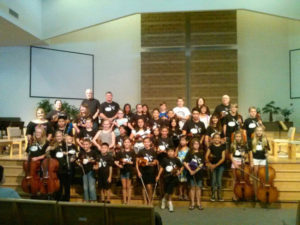 Starting from scratch is difficult. The biggest challenges for Kindred involved finding those early students who wanted to learn and a space for them to practice. So, like many change-makers, Kindred fell back on his ‘unfair advantages‘ — the unique skills or resources we each possess and can take advantage of — which, in Kindred’s case, were the relationships he built with talented musicians in the community when starting the orchestra in 2008.

“The success of a non-profit organization is based on the relationships you make and keep.” – Don Kindred, founder

His networking paid off when he partnered with Lori Bonner, who taught at the local elementary school. That first year, they taught four elementary-school aged students out of a spare classroom after school. The fun the children experienced generated word-of-mouth which soon saw the program growing until they could no longer fit in the one classroom.

Today, Corona Symphony Conservatory registers anywhere from 130-150 students at a time, including 3 out of the original 4 students Kindred and Bonner started with. And the town that previously overlooked stringed instruments is now thriving from the children’s success. This past March, Yo-Yo Ma toured the schools in the area, and even played on stage with some of Kindred’s students, launching a new cultural program sponsored through the Kennedy Center of Performing Arts in Washington, DC.

So what’s next for the Conservatory? Thanks to Kindred, Bonner, and their team, an educational system that once neglected stringed instruments is now taking a vested interest. Soon, students in Kindred’s advanced program will have an opportunity to earn college credit as well. Starting in September, students age 16 and older who are accepted into Kindred’s Youth Symphony Orchestra can earn free college credit through Norco College, giving them a leg up when they graduate high school. Meanwhile, Kindred is busy crafting the next movement.

Tickets will be on sale again once a new date is selected.